The following article was posted on the BBC website on the 24 December 2018. It was written by film maker Tom Martienssen who is also my climbing partner on the next Everest expedition.

The  reason for forming it as a blog is so the students and teachers who are following the journey of Expedition 8848 can access it around the world. 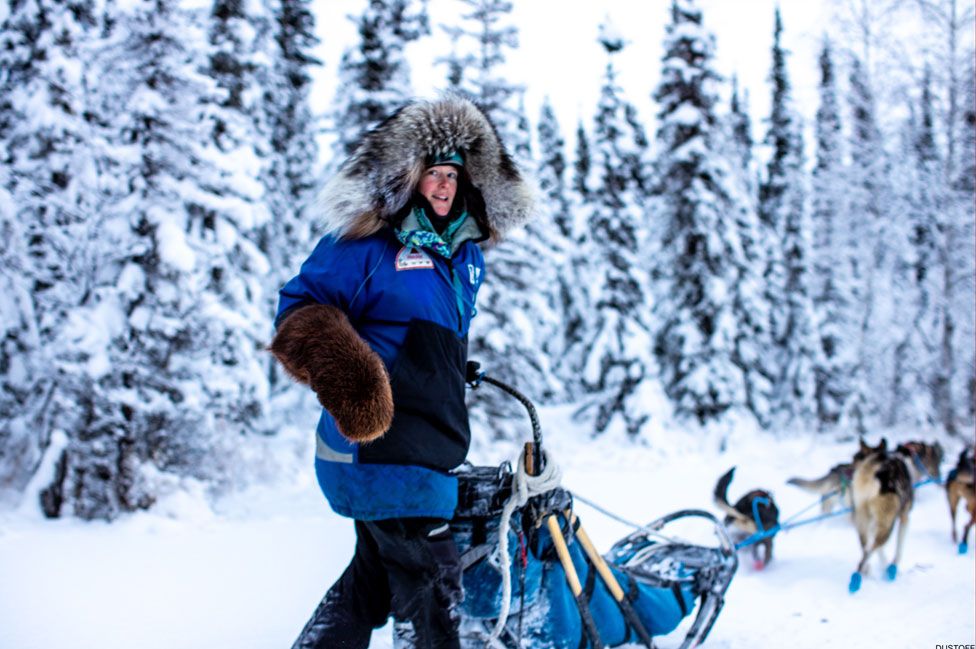 The centuries-old tradition of husky racing is alive and well in the US state of Alaska. But a changing climate means the competition season for these canine athletes is shrinking, writes Tom Martienssen.

A cold snap whips between the trees, making the most of a clear patch of ice.

It was a lake in summer, now it’s a smooth sheet of white.

The sled whispers through the snow, broken only by the panting of eight dogs working in harmony, pulling Paige Drobny on her custom-build race-sled, built by her husband and fellow racer, Cody Strathe.

This is Alaska, not far from the city of Fairbanks. Dog sled racing is huge here – the local breakfast diner features a life-size model of a racer and the bars are adorned with men and women snow-beaten and sleep-deprived, surrounded by their loyal huskies.

Anywhere outside the US and it would be considered a national sport. And in some ways, Alaska does feel like its own nation, mysterious and remote. Only a little more than one person per square mile on average, according to the US Census.

Cody and Paige are well into their training for the season’s biggest races. The Iditarod and Yukon Quest are 1,000 miles (1,600km) each and famed for their difficulty.

It’s no mean feat for humans, but these dogs are quite special.

“They are like the athletes, they’re the Super bowl or World Cup athletes of the dog sled world and we run them because that’s what they love to do.”

During a full day the dogs are burning up to 10,000 calories.

To keep them in top form they’re treated like high-performing sportsmen. A high-protein, high-fat diet coupled with daily massages and physiotherapy routines preserves their health. And the love from their owners and companions keeps them motivated.

But in recent years it’s been difficult here. The smooth, deep snow required to run the dogs at full strength is late to arrive.

John Gaedeke has lived in Alaska his entire life and runs high-end holidays in the mountains to the North of the state. Mountain sports, dog sledding and running snow-mobiles are par for the course, but he’s seen big changes in recent years.

“Safe winter travel occurs later each year, in some communities rivers may never freeze,” he says.

“Our trails across frozen tundra are developing sink holes as the ice lenses below the tussocks melt and deform. The shorter winters mean hotter, longer summers with more wildfire danger, which only makes the problem worse.”

For Cody and Paige this boils down to one thing – rougher trails, later training schedules and less time for the sport they love.

Beating through the trails, John at the reins of our battle-weary snow-mobile we’re reminded again and again of the increasing difficulty a lack of snow causes in this part of the world. A beeping from the control panel alerts us to a lack of snow beneath the tracks, overheating the engine and all but thwarting our attempts to catch up with the dog teams.

Headlights illuminate a string of dogs in front of Cody’s truck. The jutting frozen branches pierce the side of the trail.

The frozen tundra is an inhospitable place at the best of times but tonight it’s akin to a Stephen King book cover.

“Currently we have some snow but it’s not enough snow to run a big team safely,” says Cody.

“We have to have enough snow to cover all the bumps that throw the sled around and we don’t want a dog to step in a hole and cause a shoulder injury or something.” Without sufficient snow to run a full dog team safely, they attach the dogs to the front of the truck, using the vehicle’s brakes to keep them under control.

But this new configuration makes Cody feel distant from the huskies he adores.

“They still love it, they get to run outside and smell the smells but it’s not as interactive for the musher [driver], when you’ve got a windshield between you.

“It’s more like running dogs on a treadmill, so it’s a great training tool but not the kind of thing you want to do every day”.

They feed off the energy of the musher, normally clinging on to the back of the sledge. The pitch of Paige’s voice helps keep the dogs excited but Cody has to raise his two octaves to encourage them up to race speed.

Cody leans out the window into the darkness to shout commands, Ha for left, Ji for right. This has become the only way to train the dogs at the strength they require for the races.

Fourteen sled-dogs is the minimum to be competitive. Cody tells us they’ve even taught the dogs to stay to the right of the track to prevent incidents with oncoming traffic.

Squid Acres Kennel, named after Paige’s PHD thesis on squid, is at the top of its game Paige and Cody started it because of a love of dogs, but they quickly fell into competition and now often finish within the top few teams. It’s a tradition dating back hundreds of years. A reliable form of travel, now becoming more difficult.

Many people move to Alaska to escape the modern, busy world. But now it seems the world they escaped is changing centuries-old traditions – far away from the big cities.

The relationship between man and dog predates our rising temperatures.

And the thought of losing the frozen tundra that fostered that special bond is as terrifying as the looming, vast forests Cody trains in.

An established polar explorer and adventurer who operates within the extremes of our planet. His next expedition to Mount Everest will involve students from around the globe - this journal was set up to link directly with the teachers, students and the scouts who are involved in the journey. View all posts by Mark Wood